History of the Kitchen: The heart of the home?

The kitchen, though we’d have a hard time recognizing it now as such, began as the edge of the hearth, which was responsible for all of the light and heat in a home in antiquity.

The hearth was necessary for heat, light, and cooking, so the “kitchen” in a home was more or less tucked into the corner of the main room, and because the hearth was the sole source of heat and light for most families, it served as a meeting place and big focal point for families. This was true for hundreds, if not thousands, of years.
The functional, bare bones idea of a kitchen persisted until metal stoves were able to made, which allowed a much greater level of control over the fire, and allowed the kitchen to start becoming a separate room. Then in the 19th century, through industrialization, more new products hit the kitchen than ever before, in a relatively tiny period of time. This, coupled with the establishment of the modern middle class (which also meant no servants to run the kitchen) who lived in more modern housing in cities and suburbs, rather than farm houses, led to the need for a convenient kitchen that one person, usually the woman of the house, could run.
In the 1920s, we really have the early example of the modern kitchen, in that the kitchen was a tiny room (half of the size of even a modest, current day kitchen) with the bare bone essentials, like a simple sink, an oven, a kettle, and possibly an icebox (the precursor to the refrigerator – basically a box kept cold by a large chunk of ice). There was very little ornamentation and decoration in these kitchens: they were strictly for preparing food and washing dishes. In the 20’s, cabinets were still free standing pieces of furniture; they had yet to be integrated into the walls.

With electricity and indoor plumbing becoming more readily available, kitchens became more streamlined and efficient; with the rise of “Taylorism” (a streamlining process for factory layouts for increased worker efficiency – a precursor to Ford’s innovations with assembly lines) being applied to kitchens, more attention was being paid to efficiency in kitchen layouts and storage options. 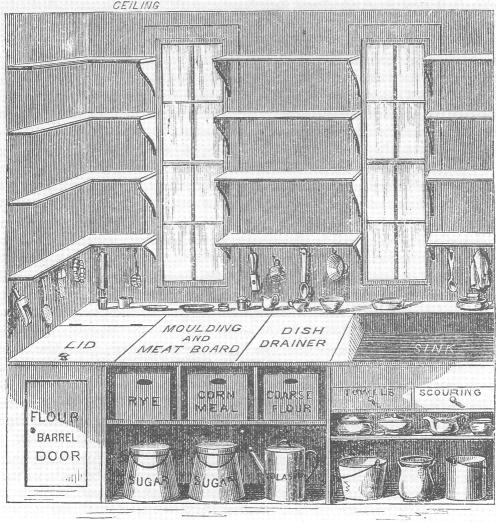 Beginning in the 1930’s, people were tired of working in a cramped, drab kitchen space. Sizes of new kitchens increased and tiled floors became popular (much less drab but still easy to clean).
Fitted cabinetry was becoming more popular; cabinets that took up a whole wall and were custom-fitted to individual kitchen were replacing freestanding cabinets, although in the 1930’s not everyone had updated their cabinets yet. Like the new cabinetry, refrigerators were replacing ice-boxes, but by no means did everyone have a refrigerator in their kitchen in the 30’s. The refrigerator looked liked a minifridge you see today in college dorms, with curved legs like on an antique bathtub: 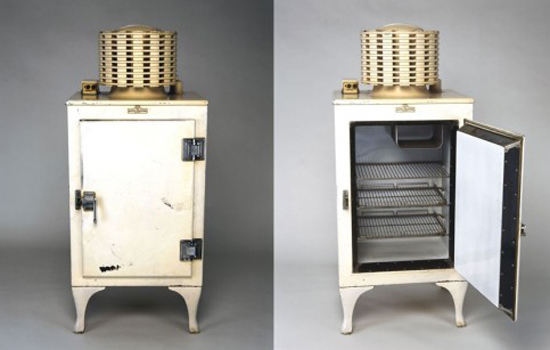 The drab walls or all wood color schemes of kitchens built before the 30’s were being spruced up with more interesting, decorative colors. The idea of a kitchen as simply a place to cook and clean was changing into a place where the family would hang out, and maybe even eat. But these ideas were far from being implemented in many kitchens.
The advent of World War 2 in the early 40’s greatly slowed down peoples’ interest, concern, and time for kitchen innovation or design. But immediately following the war, the housing boom in American suburbs urged advertisers to advertise images of what people should expect their kitchens to look like, cementing the evolving ideas of a kitchen into peoples’ minds. Consumer culture was really starting to take shape. Demand for industrial, electronic, labor-saving devices such as toaster, refrigerators, and blenders really ramped up in the 40’s. The built-in kitchen (fitted cabinetry) was essentially universally adopted at this point, with the space freed up by integrated cabinets and countertops, plus the still increasing size of kitchens, there was more space than ever to actually eat and socialize in the kitchen. Formica, invented twenty years prior, began to become a popular countertop surface.
The 1950’s took the trends of the 40’s and cemented them into the minds of middle class consumer families: consumers wanted all of the modern conveniences (people before had somewhat resisted seeing ‘time saving’ appliances as necessary), they wanted their kitchen to look like what they saw in fashion magazines, and they wanted their kitchen to be a social focal point, like a diner or soda bar. Fitted cabinetry was not a trend anymore, it was what you had to have in your kitchen, and people wanted their cabinets painted brightly (light blue and pink were popular colors). The 50’s saw lots of chrome edges on both furniture and appliances. Refrigerators began to take on their modern shape: 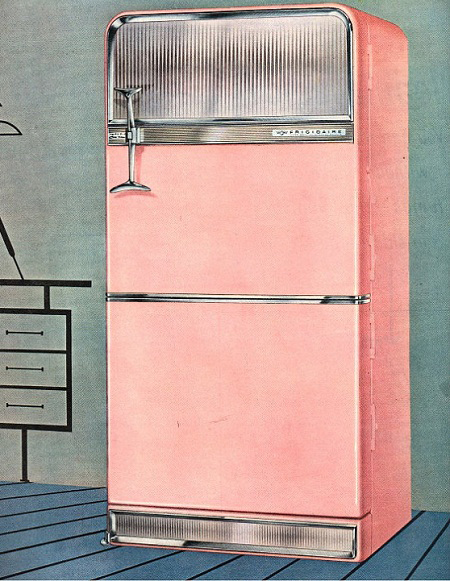 The dishwasher became popular in the 50’s, but was an extreme luxury: only the wealthy purchased dishwashers. Bright dayglo colors with lots of chrome was the norm in design; formica was even more popular than in the previous decade for countertops.

There were two competing kitchen theories in the 1960s: one was the natural evolution of the 1950s kitchen, with colors like tangerine and fuchsia replacing the bright pinks and blues of the 50s and bold stripes and flower patterns on walls and furniture. The second theory of design was a space age aesthetic: some people in the 60s designed with what they thought life in the future would look like (we are going to cover this in a future post):
The 1970s did away with the bright colors of the 50s and 60s, instead favoring earthy colors. As with the 60’s, the 70s was another decade in which people more and more saw appliances as a need for their kitchen, and less of a luxury. Flower patterns (think flower power) were extremely popular. Formica became the most prevalent countertop material; formica was seen as a symbol of modern life.
The 1980s seemed like a decade for cramming as much as possible into the kitchen: homebuilders over-filled kitchens with cabinets. The microwave was gaining in popularity: 1 in 5 kitchens now had a microwave. Wood paneling was in vogue. Extractor hoods, to act as a vent over the stove, were improved to the point where an open floor plan (combining the dining room and kitchen) was possible without making the whole house smell like food, but this concept wouldn’t take off completely until the 90s. The extractor hood made kitchen design in apartments easier, as well.
The 90s was a decade in which huge steps towards our modern kitchens were made. The clutter of the 80s was abolished, and the innovations in open-plan kitchens really started to pay off. Some people began designing and building their their kitchens to join with dining and living spaces, moving the family back into the kitchen even more; the mother/wife was no longer the sole inhabitant in most kitchens; the kitchen as the center of the home was coming back, as in the days of the hearth. The island was becoming a popular choice for kitchens as both a place to prepare food and socialize. Formica remained a popular choice for countertops. White was the most popular color choice, both for cabinets and for appliances. Everyone had a microwave.
The 2000’s saw an increase in the popularity of islands, and their expansion. Islands now had their own sinks, even! Refrigerators were made in all chrome, and the side by side refrigerator became more popular. The open plan design was used even more than in the 90s, with kitchens sharing a room with dining rooms, and even living rooms, either completely open or with a partial wall.
And so where do we find ourselves, in the middle of this decade, in 2014, when designing or planning a kitchen renovation? We have gone through the evolution of the modern kitchen and now find ourselves in the present, with the past 90 years of kitchen design pushing us forward. We can design according to trends, just going with what everyone else seems to be doing or expecting this decade. Or we can take the best out of the past 90 years; we can fuse the stark functionality of the 1920’s with the open, airy floor plans of today to make a kitchen that is both functional and beautiful. Armed with a better understanding of how kitchens have been made, and why they were made that way, we can make the best kitchens yet, while never forgetting the simple functionality that still resides in a modern kitchen as much as it did when people cooked by the light of a humble hearth. We have come full circle, from the homey, family-centric hearth, to simple, efficient kitchens, to now, when we can incorporate both into our new kitchens.
We like idea of the island the replacement of the hearth: the island is fairly simple, but functional, and it is a great central meeting place, not just for cooking activity, but for people to stand around, look at each while they talk, and maybe even eat off of.

The best design, the best products, and the best innovation in kitchen design are all yet to come. We are excited to be alive and working in 2014, which will be the most interesting and creative year yet.